The Case for Nationalization

Citigroup was nearly a public bank.

During the 2007-2008 Great Financial Crisis, the Bush and Obama Treasury Departments, the Federal Reserve, and the leaders of the largest banks and insurance companies in the nation conspired to find a way out of the mountain of worthless debt that was about to fall on the planet. The pages of the Washington Post and Wall Street Journal bore headlines foretelling the end of American capitalism. The people entrusted to manage risk across our entire economy, the people running our large banks, investing institutions, and the regulators assigned to keep them in check, through abject failure or self-interested sabotage, had engineered a bomb that sat on the balance sheet of every bank or pension fund in the world.

When all was said in done, we had a “bailout,” where public money was used to prop up banks which were labelled “too-big-to-fail.”  Not a single banker went to jail. Many received lucrative bonuses and severance packages. Most importantly, it was the taxpayer left holding this bill.  So what exactly did we buy?

The answer is the banks. We bought stock in those banks, often much more than a controlling interest.  You, me, all of us were part shareholders in the biggest bank on Wall Street.

So why don’t we still own it?

Thomas Hanna of Democracy Collaborative lays out the case for bank nationalization and public ownership of lenders and insurers in his new paper The Crisis Next Time.–

He describes the bizarre contortions that the US government went through to avoid public ownership of banks in 2007-2008, despite the total incompetence and greed that led to the crisis itself, and the need for unprecedented intervention with the people’s money.

As part of TARP (Troubled Asset Relief Program) and CPP (Capital Purchase Program) we, as a people, bought pieces of 707 banks and financial institutions, including 77% of insurance company AIG, 36% of the megabank Citigroup, and nearly 74% of GMAC, the former lending arm of General Motors.  Like every other country on Earth, including the United Kingdom, Belgium, Iceland, and Ireland, we used public capital to purchase bank stock and seize control of these critical financial institutions at a critical moment. The alternative was the end of our economy, our currency, and likely an economic dark age.

But unlike every other country on Earth, we didn’t ask for anything in return. Hanna writes:

Outside of unusual circumstances, the preferred securities were non-voting, the government could not appoint directors unless an institution missed six dividend payments (and then only two), and half the warrants were redeemable before December 31, 2009. In the AIG case, the government’s 77.9 percent ownership stake came in the form of preferred securities (convertible to common stock) that were placed into an irrevocable trust (with the Treasury Department as beneficiary) administered by three trustees recruited from private sector finance appointed by the Federal Reserve. “The trust instrument provided the trustees with complete power to vote and dispose of the government’s shares,” Davidoff Solomon reveals. Thus “the government effectively ceded control over both its ownership interest
and AIG by placing its shares into this trust.”

By going to such extreme lengths to avoid any straightforward nationalization, the U.S. government response to the Great Financial Crisis became unnecessarily complicated, totally devoid of transparency, and replete with backroom deals and perverse incentives. It is hard to believe that a pure capital for stock transaction with the government exercising full voting rights would not have been preferable to the messy, hybrid approach the government took.

While other countries bailed out their banks and either held them as public assets or disposed of them for a substantial profit to their people, the United States took extraordinary steps to keep the taxpayer from gaining anything from the bailout of Wall Street.  We didn’t even ask for a say in when or for how much they were sold. Instead, our elected representatives arranged to buy bank stock through receivership, appointing industry functionaries to manage and sell off the stock at time and place of their choosing.

Rather than nationalizing the banks, we gave them all of our money and told them to return it whenever they could.

The nationalization of banks — the seizing of bank stock or bank assets usually as a response to a financial crisis or widespread fraud — is very common in countries of all sizes and stages of development.  There is a long history of governments and regulatory agencies stepping in to rescue and dismantle banks, lenders, insurance companies and other large companies when doing so means mitigating harm to the general public or wider financial system. Most commonly, national governments use their bank regulatory power to seize bank stock, unwind debt and obligations (often settling with the bank’s creditors at taxpayers expense) and then dispose of assets and liabilities while protecting the deposits of innocent customers. When the bank is back in good health, the government sells it off to private parties for a profit, which compensates the public for the risk of public capital.

The United States, and the United Kingdom from which it borrows its oldest protestant wisdoms of monopoly disguised as impartiality, penury dressed up as thrift, is supposedly allergic to the public ownership of commercial enterprise, including and especially banks.  The common wisdom, so we’re told, is that public banks would be subject to increased fraud and political influence compared with commercial banks, leading to inefficiencies and theft that would drain public money and compound poor credit policy with grift. This common wisdom is a projection, it exonerates the banking sector for exactly these malfeasances while projecting them onto a public banking sector which doesn’t even exist yet. For a small example from Hanna’s paper, here is a list of fines and penalties issued to Citigroup since the government sold it back to private investors in 2008:

• $75 million for misleading investors over its subprime loan exposure;

• a share (with four other banks) of $25 billion for loan and foreclosure abuse;
• $158 million for fraudulently getting the U.S. Government to insure risky loans;

• $590 million for deceiving investors about its exposure to subprime debt;

• a share of $8.5 billion (with nine other banks) for foreclosure abuse;

• $730 million for misleading institutional investors over the offering of Citi stocks and bonds;

• $968 million to Fannie Mae for misrepresenting the home loans it sold the agency;

• $395 million to repurchase loans it had sold to Freddie Mac (which were not eligible to be sold);

• $95 million for its role in the LIBOR interest rate manipulation scandal;

• $97 million for money laundering (by its Mexican affiliate Banamex);

• $1.13 billion for misleading institutional investors over the sale of mortgage-backed securities;

• $7 billion for packaging and selling toxic assets before the financial crisis;

• $15 million for failing to supervise communications between clients and stock analysts;

That’s about twenty years of wrongdoing in ten years of prosecutions.  It’s hard to imagine a public entity, with transparency and accountability requirements that no commercial bank currently comes close to matching, would commit a fraction of the widespread fraud and error than Wall Street already has.  And that’s before all the legitimately acquired returns that they centralize and then pay themselves. Finance is an enormous part of our economy despite providing no materially productive purpose. Liquidity and planning are essential to economies. Private shareholder quarterly returns less so. 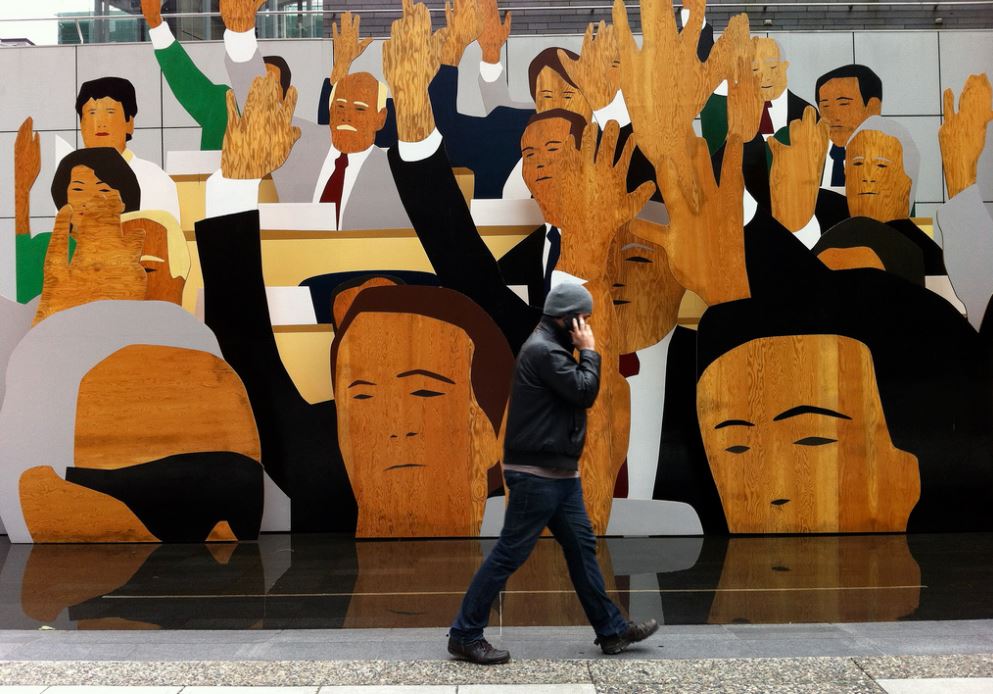 In The Crisis Next Time, Thomas Hanna lays out the case for public banks as both a response and a solution to the next financial collapse.

There are many examples of successful public banks at varying scales, models, and purposes. He mentions the Japanese postal bank, which is partially privatized, but is the largest majority-public owned bank in the world, one of the largest depository banks in the world, and a major employer in that country.  And he rightly points to the myriad pseudo-banks that the US government operates in order to lend to and insure critical industries, recalling how “in 2009, then Secretary of Agriculture Tom Vilsack commented that if all of the Department of Agriculture’s lending activities were accounted for, it would be “the seventh-largest bank in the country.””

He cites research on the subject, saying:

[…] studies on comparative efficiency do not universally support the theory that publicly owned banks are less efficient than privately owned ones. For instance, in 2014 the OECD summarized a number of studies of publicly owned German banks, writing that “savings banks appear to be at least as efficient as commercial banks.”1 Similarly, a 2008 study of Russian banks revealed (to the authors’ surprise) that “domestic private banks are not more efficient than domestic public banks.”

And quotes a 2010 paper from the University of Leicester that says:

While many countries in continental Europe, including Germany and France, have had a fair amount of experience with government owned banks, the UK and the US have found themselves in unfamiliar territory. It is, therefore, perhaps not surprising that there is deeply ingrained hostility in these countries towards the notion that governments can run banks effectively. We show in this paper that such views are not well founded. Our empirical findings which utilise cross-country data for 1995–2007 suggest that, if anything, government ownership of banks has, on average, been associated with higher growth rates.

Legislation could provide direction and authority for the government to step into more permanent ownership of banks when the next crisis comes. By making a plan in advance, we could prioritize protection of the people least responsible for overleveraging and undercapitalization: depositors, workers, taxpayers, and retirees.  We could set strict rules for transparency and participatory management of these institutions once in public trust, and would provide much needed mechanisms for realigning compensation for bankers and brokers so that their incentives line up with the economy as a whole.  Most importantly, it would codify the public ownership of finance as a viable and established power of government, paving the way for the socialized ownership of every other form of capital.

The case for nationalization, Hanna says, is not a pie-in-the-sky reimagining of the financial system; one unlikely to come about when Democrats in congress aren’t even able to maintain the meager regulation that already exists.  It is a concrete plan, with all the details worked out in advance, for when the next great financial upheaval comes – and it will come:

On the face of it, of course, immediate prospects for passage of legislation mandating public ownership instead of public bailouts in a future financial crisis are poor (especially given current Republican control of Washington). However, this is not about now. It is about being prepared for when the pendulum swings. It is about having a plan in place when the next crisis occurs. Even if such legislation has never made it out of committee, when the crisis comes, it could be dusted off and re-introduced—either as a stand-alone bill ahead of any bailout legislation, or modified and attached as an amendment to whatever legal authority the government at the time is seeking to deal with the crisis. It is to our advantage to work out the arcane technical details of such an approach now, in advance of a financial emergency demanding swift action.

The next time there’s a bailout, it cannot come with no-strings-attached. And the next time we buy a bank, we should keep it, and run it ourselves.